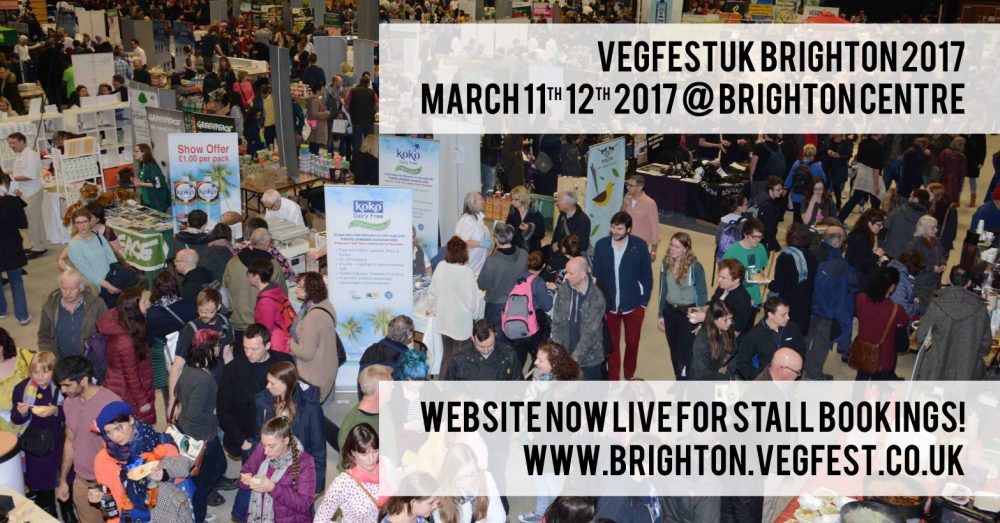 One of Europe’s biggest vegan festivals VegfestUK will be back at the Brighton Centre on March 11th 12th 2017, with a number of interesting features planned for an expected crowd of around 11,000 visitors overall.

Thanks to all your support and suggestions over the years, VegfestUK Brighton continues to get bigger, better and more interesting and the following features are planned for the 2017 event:

Around 20 globally inspired caterers will be serving up an amazing vegan feast of food, ranging from dosas, sushis, hot dogs, doner kebabs and pizzas, to Caribbean stews and plantains, cakes, falafel wraps, Indian cuisines and many other food varieties.

The growing demand for exhibition space amongst small independent businesses has led to an increase in the number of stalls available to around 230 stalls, with various rates available for both charities and businesses.

Whether you’re looking for vegan substitutes for meats, cheeses, milks, chocolates, pies, clothing, merchandise, gifts, literature, cosmetics, bodycare, or just information on veganism, there’s something for you at our amazing collection of stalls! A lot of the stallholders will also be doing special offers just at this event.

A series of talks giving you all the info you need on veganism – tailored to complete beginners to veganism.

Beginners to veganism will enjoy a series of talks geared for newcomers from a collection of dynamic, engaging speakers…

There’ll also be a selection of speakers expanding on advanced philosophical topics on veganism.
INTERSECTIONAL VEGAN SUMMIT (SATURDAY ONLY)

An interesting summit with a number of knowledgeable experts speaking on intersectional issues in veganism.
UK VEGAN COMEDY FESTIVAL (SUNDAY ONLY)

Thoroughly well received for its last 2 editions at the Brighton Centre, the comedy festival will be back in full force, with a number of headline comedians TBA.
VEGAN FILM FESTIVAL

A number of really captivating and potentially life-altering documentaries on vegan topics will be shown on both days. Documentaries TBA.
VLOGGERS CORNER

The event will also include the usual mix of Cookery Demos, a Teen Zone for teenage vegans to chill out and mingle with like-minded vegan teens, a Mature Zone with a series of talks on veganism for the mature, Kids Cookery Classes, Magic Shows and more!
Admission to the event is by both advance tickets and tickets on the gate. Advance tickets cost £7 (day) / £10 (weekend) plus booking fees. Advance tickets are now on sale at: